Where are my keys? 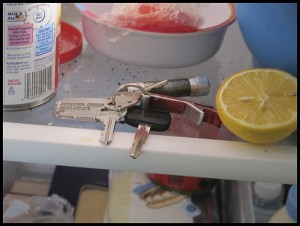 As a child I was interested only in getting away from my parents, having fun outdoors, being allowed to stay up late and getting my hands on as many sweets as I could carry – I lived in a sugar-filled bubble.

Friendships were only marginally important – as long as Ihad someone ot play with – until my teens and then it was incredibly important that I have time to see and talk and be with them, second only to my angst over failing exams, the death of the world, population explosions, and human tragedy stories – the world was a dark and violent place.

We’ll skip over college because, apart from knowing you have to pass the finals, there is only one thing on our minds.  Well, three things.

Then, studying was over and I worried about my job, size of my company car, my salary (in relation to everyone else’s), my holidays…whatever happened to my concerns about the dying planet and carbon emmissions?  I’d gone from deep to shallow in the space of one contract.

Then came mortgages and children – with sticky children nothing else has a chance to cling.

I never once worried about my decaying body but now it is my first thought as I creak open my eyes, roll over – because sitting straight up is now uncomfortable – hunch right over to search for my slippers – I can no longer stretch first thing – consider putting in a winch (or a contraption similar to Wallace’s) to haul me upright and shuffle into the bathroom, all the while trying to remember what day it is, how long I have to wake up properly and whether I’d foolishly promised to do something for someone first thing.  Morning sex is now restricted to holidays. (Okay, this is a lie).

My mother, at the age of 74, is extremely active.  I can see how tired she is, how much her bones and joints ache, but she never says a word.  She and her little coven regularly vanish off to the wilds of Gloucestershire to a meditation retreat where they have to lock away their mobile phones and problems for nearly two weeks at a time.  During that time the only contact we have with her is either via the centre itself when I have had to call and let her know her brother has died (yes, I did this more than once) or if she’s broken down on the way.  These women are amazing.  They just never stop.  They’re up with the larks and planning while my head is still trying to work out what day of the week it is.  How do they stop themselves from lying-in?  I feel as bemused by this as my eight year-old self wondering how adults stopped themselves from spending all their money in sweetshops.

My body is already showing signs of wear and tear – take my hilarious decision to do the London to Brighton bike ride with my overweight body (what’s the point of forking out extra for a bike that is 20lbs lighter when I’m four stone heavier?), dodgy knees and anaemia?  But if it wasn’t for my decision to sign-up for the ride I wouldn’t be forcing myself out of my comfy bed at stupid O’clock on a cold, drizzly Sunday morning to ride 24 miles with friends.  And it is for my friends, because I don’t want to let them down – or so I tell myself – that I do it.  So, maybe I do know why my mother hauls her little group up to Gloucs ever few weeks.  They chivvy each other along.

I still don’t get why she doesn’t moan about it.

So, while my brain is slowly forgetting everything it’s every learnt and the glue that allows new information to stick has dried to a fine powder, while my body screams at me that it’s not time to get up yet and while I can barely bend over to tie my shoelaces, my friends and family tell me I can do this and get up with me to slog our way over mile after mile of beautiful countryside.

In this week’s New Scientist is an article about brain degeneration and, being of an age when physical deterioration is very important to me, I flicked straight to it.  ‘If you believe fading brainpower is an inevitable part of growing older, think again,’ says Michael Ramscar and Harald Baayen.

They also say, ‘contrary to popular belief, neuronal loss does not play a significant role as we age.’

I shall have to find time to read this article in more depth.  In the meantime, that tea’s gone right through me…

I am a wild-haired author who cannot stop writing. The writing process is not a task for me. It is an extension of myself. When I write, I lose myself as easily as if I slipped into the story for a swim. Writing became a serious part of my life in Decmber of 2009. Unless you're reading this in 2017 it wasn't that long ago, and the bug hit me hard and fast. My first novel, Banished, was published in March 2010 and is available at http://www.amazon.co.uk/Banished-ebook/dp/B008PGM4TQ/ref=sr_1_1?ie=UTF8&qid=1361913026&sr=8-1. If you read it, or anything else I've written, I hope you'll post a review and let me know why you liked it - or even why not!
View all posts by Bea Turvey apprentice author and witch →
This entry was posted in New Author and tagged ageing, friendships, memory, New Scientist. Bookmark the permalink.