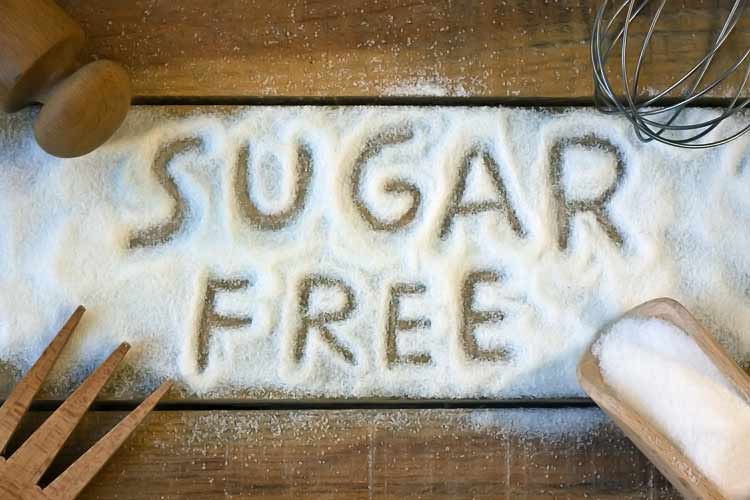 …but its fruit is sweet,’ said Aristotle.  He was probably thinking of loftier challenges than giving up sugar, but that is where I am and my sweet tooth clings hopefully to that little snippet of advice.

It’s been 5 weeks since I divorced myself from sugar and I still grimace when I take that first sip of unsweetened coffee.  Worse than that, I’ve had to give up normal tea – tea, people!  Because there are some things that just won’t work in my sugarless world. Instead, I grudgingly drink tea with a slice of lemon, mouth pouting although one might mistake it for a sour pucker.  Still not the same, but better than no tea at all and that is something I refuse to contemplate.

Why was it was such a wrench to give up sugary tea?  I think it’s because tea was our childhood panacea when times were hard, fraught or we were ill.  It was our comfort, along with hugging arms and I feel as though someone has whipped away my inner blankie.

I started on this ‘bitter’ path with my cousin.  I’m rubbish at motivating myself and will procrastinate, find excuses to cheat and convince myself to leave it for ‘just one more week’.  But with her conscience (and strong kicks up the arse) I have managed to remain true to our pact.  Neither of us can let the other one down and we confess our slip-ups immediately (trying a bit of the banana bread to check it is cooked; automatically grabbing a crisp off the table; taking a sip from the wrong mug [I may not have admitted that one yet, so I hope she’s not reading this]…).

The first two weeks were all about the sugary drinks.  Out went the sugar bowl completely – well, actually, figuratively, because it still sits there for the hubby and kids to indulge, but I am only allowed to look upon it wistfully.  I used to be a ‘three spoons, please’ person and have now gone cold turkey with all its attending ailments (I’ll come to those).  No sugar in tea or coffee (bleuch!), no squash or colas and no camomile with honey.

After a couple of days the headaches set in – I’m unsure if it was the lack of sugar or lack of caffeine (hating the taste of sugarless tea/coffee I drank hot water or green tea).  I had more paracetamol in that first week than I would have had sugar.

Then, the early morning wake-ups struck like unasked for extra me-time.  I’m not kidding.  2 or 3 am, I’d be wide awake and restless until around 5 am, but too tired to do anything but think of how much I wanted to sleep.  Added to which, I had restless leg syndrome (paracetamol worked great for that, too; my chemist began to worry) and I tossed and turned enough to warrant remaking the bed from scratch every morning.

After two weeks, my cousin (I might disown her) and I gave up crisps, biscuits, cakes, ice-creams and pudding.  That wasn’t as tough for me as the drinks, because I don’t normally indulge, but my cousin found it hard-going (she’d been having way too many biccies with her sugarless cuppa) and we’d both naughtily squeezed in an ice-cream pretty much every day.  Instead of crisps I have a small handful of nuts and seeds.

While I never have pudding on weekdays, I used to indulge and help myself to a slice of the cake in the staff kitchen (courtesy of someone’s birthday).  Now, all I am allowed to do is sniff that wonderful chocolate, creamy, baked-goodness aroma.  I supplement my weekend pudding with fruit platters – bananas, apples, berries, mango, papaya, pomegranate, nectarines, melon… No fruit juices, as concentrated, squished versions have way too much fructose, which the body has no resistance to.

I’m finally sleeping a little better (I wake up around 4 for an hour), but I still cringe at the taste of sugarless coffee and I want a proper cup of tea!!!   Do I feel better – not really.  Am I more alert? I don’t think so.  Do I have more energy? Nope.  Are my skin, hair and nails healthier?  No, no and no.  Have I lost weight?  I wished.

I’ll check back in another month and let you know if anything’s changed, except I have a feeling we’ll be cutting out alcohol next and I may be incarcerated for cousinicide.

We’ve told ourselves we’ll treat ourselves, sometime, somewhere.  If we’ve been good.

BTW – I did my research and everyone says I won’t notice the lack of sugar after a few weeks.  5 weeks on, I’m telling you THEY LIE!

So, it’s been more than a month since I created the original post, in fact, it’s been a year!  I have to admit, I held out for more than 6 months, but then reverted back to taking sugar, but panic not for I have drastically reduced my consumption.  I only have a spoonful of sugar in my beverages and only 2 cups a day rather than the 4 or 5, so overall, I have gone from 15 spoons a day to 2.

It was tough.  There’s no easy way to say it and there are no shortcuts, but it is worthwhile because the most important point is that sugar is addictive.  I can tell you for a fact that when I have something sweet, I crave more sweetness.

So, what have I learned?  Basically I need to change what I eat, remove the need for the cravings.  Substitutions don’t work.  All they do is perpetuate the bad habits and sugar is a very bad habit.  So, instead of substituting your high sugar drinks and treats with low sugar versions, eat and drink something completely different.  Those biscuits you have with your tea?  Ditch the tea and the biscuits and encourage your body to drink more water.  Puddings after every meal?  Eat fruit instead – and I do mean, eat fruit, not drink a glass of juice or smoothie, but sit down and peel and orange.  Think about it: if you want your child to stop doing something, such as using their phone all day, you distract them, you don’t give them a tablet or the TV.

I’m trying to recall when these terrible habits began and I have to come to the conclusion it was when I left home – keen, exited and so confident that I knew everything!  Sound familiar?  I was brought up vegetarian – no meat, fish, eggs or cheese – with lots of fresh fruit and vegetables.  The only time we had ‘rubbish’ was at weekends or when we went to parties or had picnics (ot if the ice-cream van came round and my dad could get away with my mum not knowing).  But, when I left home, and I was buying my own food with no restrictions (other than cost), my diet went downhill very quickly.  Being younger, I managed to disguise the effects of this bad diet, from a health perspective, by exercising lots.  It was a harsh balancing act, poisoning myself then purging myself.  But the real danger was not the short term, but in the long term because I’ve ended up with these very bad, hard to break, habits, which I’ve have passed on to my children.

I am a rubbish cook and I do not cook the foods I ate growing up, but the foods I learnt cook with my unregulated grocery buying.  My mealtimes increased – I went from breakfast, lunch and dinner to breakfast, elevenses, lunch, tea, dinner, supper… the full Hobbit overindulgence.  I had the double whammy of bad eating habits.  Now, I have to pull myself and my family back to a healthier eating regime and it’s tough, especially when bombarded  with whinges and whines and moans and groans.  When you’re struggling not to fall back into bad habits and have to also contend with them pushing you it becomes four times the battle.

So, the conclusion?  Change your daily meal plan; create a weekly menu full of healthy options, not substitutions; stop buying crap (if it’s in the house, you’ll eat it) – and shop after you’ve eaten a meal, not when you’re hungry; if you eat/drink rubbish when you do a particular activity then stop doing that activity or do it differently; talk to your family so everyone is on board.  And, most importantly, remember a treat is only a treat if it isn’t the norm!

I am a wild-haired author who cannot stop writing. The writing process is not a task for me. It is an extension of myself. When I write, I lose myself as easily as if I slipped into the story for a swim. Writing became a serious part of my life in Decmber of 2009. Unless you're reading this in 2017 it wasn't that long ago, and the bug hit me hard and fast. My first novel, Banished, was published in March 2010 and is available at http://www.amazon.co.uk/Banished-ebook/dp/B008PGM4TQ/ref=sr_1_1?ie=UTF8&qid=1361913026&sr=8-1. If you read it, or anything else I've written, I hope you'll post a review and let me know why you liked it - or even why not!
View all posts by Bea Turvey apprentice author and witch →
This entry was posted in Health and Lifestyle and tagged diet, food, Health, lifestyle, sugar-free. Bookmark the permalink.

4 Responses to ‘Patience is bitter…